The lawsuit argues that the Trump-Pence Administration’s new Rollback Rule violates the Administrative Procedures Act by being contrary to law and arbitrary and capricious. The lawsuit also asserts that the new rule will embolden discrimination and harm LGBTQ+ patients and people seeking reproductive health care, further stigmatize abortion and other pregnancy-related care, harm patients with limited-English proficiency, especially immigrants, and harm people with chronic illnesses, including those living with HIV. The Rollback Rule will also create confusion about the scope of protections against discrimination under federal law.

The plaintiffs in BAGLY v. HHS represent a broad, national cross-section of those who stand to be most harmed by this discriminatory rule. Plaintiffs include a transgender man who regularly needs to access healthcare and uses health insurance but has faced healthcare discrimination on the basis of his gender identity repeatedly, two leading healthcare providers with an outstanding history of service to the LGBTQ+ community, as well as patients who are chronically ill, living with HIV, disabled, immigrants, limited English proficient and people of color; and four organizations that provide a wide range of services to these same communities across the United States, including facilitating access to healthcare. 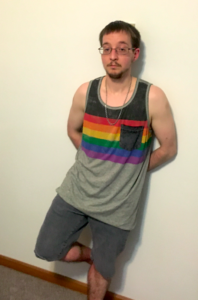 Darren Lazor is a transgender man and a member of Equality California. Darren lives in Ohio, where he has experienced extensive healthcare discrimination based on his gender identity. For example, in 2012, Darren sought treatment for symptoms that later turned out to be endometriosis and a large ovarian cyst. Darren was denied treatment by three healthcare providers because of his transgender status before finally receiving treatment for his life-threatening condition. In December 2017, Darren began experiencing shortness of breath as the symptom of a recurring health problem. He returned to the emergency room closest to his home where he once again experienced a hostile and disrespectful hospital staff who discriminated against him in several ways, from misgendering his hospital bracelet as female, to making audible expressions of disgust when affixing EKG stickers near Darren’s mastectomy scars, to ignoring him in the treatment room with no explanation. When the Trump-Pence Administration issued its decision to undermine LGBTQ+ nondiscrimination protections in the Affordable Care Act, Darren decided to step forward and share his story as a plaintiff in BAGLY v. HHS to ensure that no one else will be denied life-saving healthcare or be discriminated against simply because of who they are.

Callen-Lorde Community Health Center is a federally-qualified community health center whose mission is to provide sensitive, quality healthcare and related services targeted to LGBTQ+ people in the New York City area, regardless of their ability to pay.

Campaign for Southern Equality is a nonprofit organization dedicated to advancing LGBTQ+ civil rights. It is based in Asheville, North Carolina, and advocates throughout the South, focusing on North Carolina, South Carolina, Georgia, Alabama, and Mississippi, on behalf of LGBTQ+ individuals and other marginalized groups. Its mission is to promote full LGBTQ+ equality—both legal and lived. About 40% of its work focuses on LGBTQ+ access to healthcare.

Fenway Health is a federally qualified health center whose mission is to provide healthcare to the LGBTQ+ community and to all people through access to highest quality healthcare, education, research, and advocacy. Fenway Health aims to increase access to care for existing and new patients and to work towards greater racial and ethnic health equity within its community.

The Transgender Emergency Fund is a nonprofit organization dedicated to supporting low income and homeless transgender people in Massachusetts. The Transgender Emergency Fund serves the healthcare needs of transgender people by providing financial assistance to transgender people for co-payments for hormone replacement therapy and transportation to medical appointments; financial assistance for personal supplies such as soap, toothpaste, and deodorant; clothing for winter months; money for laundromat services; replacement identification with corrected gender markers; and home rental startup costs like the first and last months’ rent for an apartment.

Section 1557 and the Rollback Rule

On June 12, 2020 — under the Trump-Pence Administration — the Office of Civil Rights announced a new final rule — known as the Rollback Rule — to revise the agency’s prior interpretation of Section 1557. The new rule no longer interprets sex discrimination prohibited by Section 1557 to include discrimination on the basis of sexual orientation or gender identity. The new rule also emboldens discrimination based on pregnancy, false pregnancy, abortion care and childbirth and removes requirements to facilitate access to healthcare by patients with limited English proficiency. The Office of Civil Rights did not actually publish the Rollback Rule until June 19, 2020 — just days after the June 15 U.S. Supreme Court ruling in Bostock v. Clayton County, which found that it is unlawful sex discrimination to fire employees based on sexual orientation or gender identity.

The Trump-Pence Administration’s Rollback Rule was issued amid a global pandemic, unprecedented national unemployment with people losing access to health insurance, an epidemic of police violence against Black people and a crisis of violence against Black trans people. There could not be more disgraceful time to allow healthcare discrimination — the denial of medical care simply because of who a person is — than during a global pandemic.

LGBTQ+ people — especially trans people, LGBTQ+ people of color, LGBTQ+ immigrants and LGBTQ+ people in rural areas — already face significant barriers to healthcare. That’s exactly why Congress enacted Section 1557 in 2010 and why HHS issued the initial rule in 2016: to protect people from discrimination; not to embolden those who would discriminate, as the Trump-Pence Administration is now attempting to do.