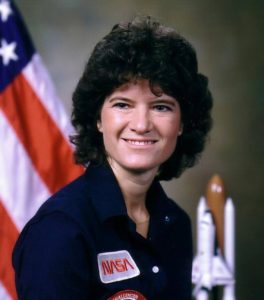 Sally Ride was the first American woman in space. Under a new California social science requirement to include LGBT history, advocates want textbook publishers to also note that she was a lesbian. Anonymous The Associated Press file

Amid a wave of gay youth suicides that generated national concern, California in 2011 became the first state to require lessons on the historical contributions of the lesbian, gay, bisexual and transgender community in its K-12 curriculum.

“The historically inaccurate exclusion of LGBT Americans in social sciences instruction as well as the spreading of negative stereotypes in school activities sustains an environment of discrimination and bias in school throughout California,” former Sen. Mark Leno, a San Francisco Democrat who authored the law, stated at the time. “This is a primary obstacle to addressing California’s bullying epidemic that continues to plague a majority of LGBT youth.”

But as California officials prepare to adopt instructional materials that, for the first time, meet these new LGBT guidelines, gay rights groups are raising concerns that the textbook options before the state fall far short of the inclusion sought by Leno. Organizations such as Our Family Coalition and Equality California will appear over the next two days at a meeting of the Instructional Quality Commission, an advisory panel that makes curriculum recommendations to the State Board of Education, urging members to reject all but two of a dozen elementary and middle school social science textbooks proposed by publishers, unless edits are made.

These same LGBT advocacy groups collaborated with the state on a history and social science framework, adopted last year, that they now say the textbooks are failing to meet. It includes broad lessons, such as the diversity of families, and specific figures, like “mother of social work” Jane Addams and pioneering astronaut Sally Ride, both of whom had female partners.

“It’s a matter of representation,” Moreira said. “We had historical figures that actually had same-sex relationships and contributed in positive ways.”

Moreira said a handful of the proposed textbooks are completely unacceptable because they omit LGBT content altogether – advocates have called it “erasure” – while she could accept several others if the publishers make changes and additions. The commission meets at the California Department of Education on N Street, with a public hearing on the history and social science material scheduled for 2 p.m.