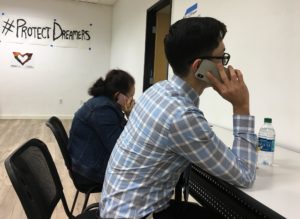 On Thursday, January 18, 2018, Equality California was proud to co-organize a phone bank with the LGBT Center Orange County to urge members of Congress to pass a clean DREAM Act and create a pathway to citizenship for young DACA recipients who every day face the threat of deportation.

Local activists came out to show their support and do their part in the fight to protect Dreamers. These activists included LGBTQ people, immigration rights advocates, and local organizers who believe, as we do, that the fight for Dreamers is an intersectional one.

Ever since Trump ordered an end to the program known as Deferred Action for Childhood Arrivals (DACA) in September 2017, many young undocumented immigrants who were brought to the United States as children (also known as Dreamers) have been living in limbo under the threat of deportation after trusting the government by listing personal identifying information in their DACA applications. To date, Congress has failed to present a permanent legislative solution. Although Trump alleged that there would be no deportations until March 6, 850 Dreamers a week are already losing their DACA protections. Additionally, Immigration and Customs Enforcement (ICE) has already begun arresting and detaining Dreamers.

This isn’t just an immigration fight. This is an LGBTQ civil rights fight. Out of the over 75,000 LGBT Dreamers across the country, the Williams Institute estimates that 22,000 of those LGBT Dreamers reside in California. LGBTQ immigrants are disproportionately detained by ICE and face multiple layers of fear related to the threat of deportation. Deportation can be a death sentence for LGBTQ people who are sent to countries where LGBTQ people are subjected to hostility and violence, or where LGBTQ conduct is criminalized.

Congress must act immediately to find a solution for Dreamers, including those who identify as LGBTQ. Equality California will continue to fight alongside our partner organizations and community activists to urge Congress to do the right thing: pass a clean DREAM Act and protect our Dreamers. We cannot wait any longer.

Here are just a few of the activists who joined us for the phone bank and shared why they participated: 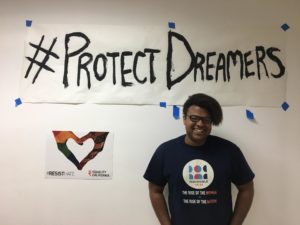 Aaron McCall: “I’m here tonight as a young gay black activist because I believe that the fight for [LGBTQ] rights is by nature intersectional. Our fight does not begin and end with marriage, but includes fighting for those who have come to this country for a better life, and are part of our community! The Dream act is an LGBT issue, and I’m proud to fight for it.” 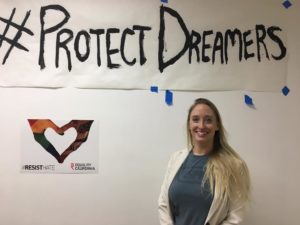 Erin O’Neill: “I have always believed that every person is deserving of dignity, respect, and the opportunity to live a life of hope without fear. As an immigration attorney, I see how the termination of the DACA program has caused pain and anxiety for countless individuals and their families every single day. Our Dreamers are integral, contributing members in our society and deserve better than the abandonment of the only home many have ever really known. The Clean Dream Act is a step in the right direction.” 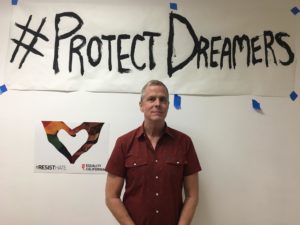 Bob Tucker: “This country was founded by immigrants who are the strength and backbone of our country. Young undocumented people who were brought here in their youth are valued, work, pay taxes and should have the same chance for citizenship as my ancestors did.
An injury to one is an injury to all. We must protect and support our Dreamers!”

If you are interested in volunteering at Equality California events in Orange County, please email Justin.Massey@eqca.org.