Friday, June 17, marks the one-year anniversary of the racially-motivated shooting of nine worshipers at Emanuel AME Church in Charleston, South Carolina. There have been 551 mass shootings of four people or more since then. But the shooting last Sunday, June 12, is now considered the worst mass shooting in U.S. history with 102 people–mostly young gay Latinos— shot by a deranged terrorist with an assault rifle at Pulse nightclub in Orlando, Florida, leaving 49 dead, 53 wounded and families and a country devastated.

Though gun violence has always been an LGBT hate crime issue, the Orlando massacre brought it to the foreground. The National Coalition of Anti-Violence Programs released a study this week noting that reported LGBT homicides rose by 20 percent in the U.S. between 2014 and 2015. Of the homicides reported last year, 62 percent were LGBT people of color.  The epidemic of carnage has prompted LGBT groups such as Equality California to say enough is enough and to make gun control legislation a new top priority. 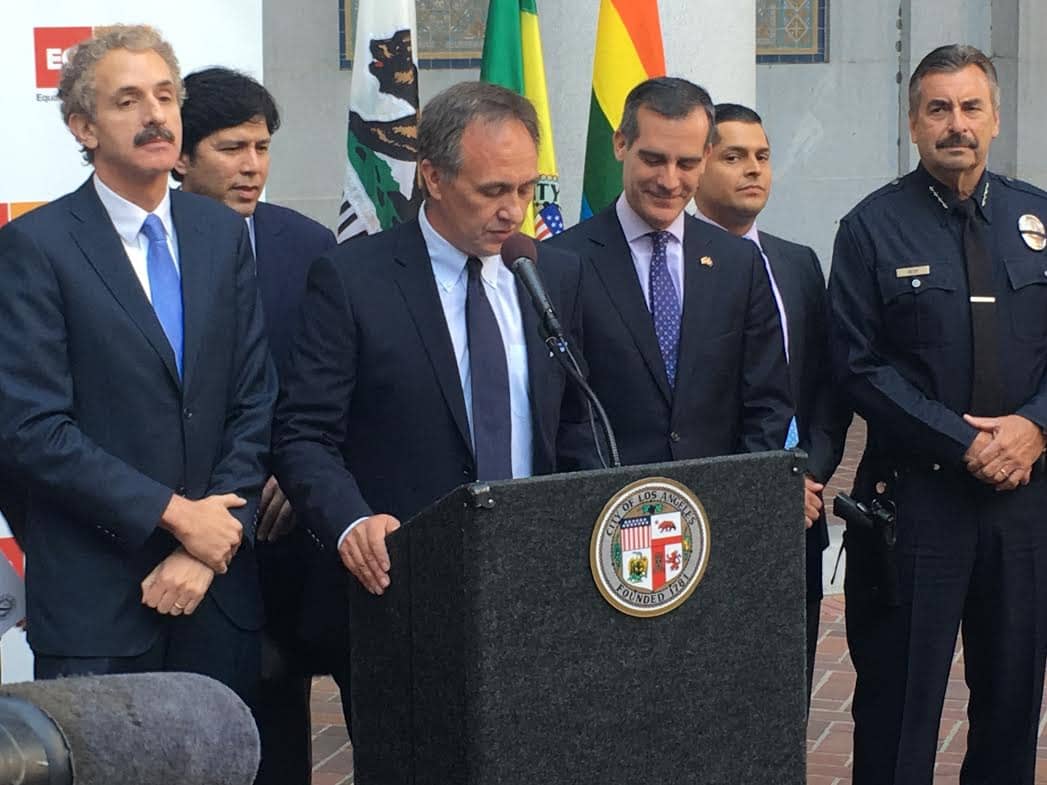 “Last weekend, the LGBT community was the target of the worst mass shooting in U.S. history,” said Rick Zbur, executive director of Equality California at a Friday news conference at Los Angeles City Hall with state legislators, LAPD Chief Charlie Beck and LGBT activists. “Orlando is a call to action. Ending gun violence must be one of the LGBT community’s highest priorities. We must take every step to strengthen gun safety laws at the federal and state level to prevent another Orlando from ever happening again.

“Ending gun violence is also an LGBT issue because LGBT people are disproportionately impacted by gun violence,” Zbur continued. “Transgender women face epidemic rates of murder and violent crime. Hate crimes are on the rise throughout the United States and members of communities of color suffer the highest rates of gun violence.  In the weeks and months ahead, Equality California will relentlessly work in Washington, D.C. and in Sacramento, and mobilize our 800,000 members and the LGBT community to support legislation to keep our community – and everyone – safe.”

This is not some esoteric rhetoric—Equality California has a personal stake in stemming gun violence.  “Orlando impacted us personally,” says Zbur with straight ally and board member Mark Vargas flying to be by the side of his beloved Latina cousin Laura, one of the first to be shot in the Pulse nightclub. She was there celebrating a personal success with one of her best friends. Not until she came out of critical condition in the hospital did Vargas tell Laura that her friend was among the 40 horrifically murdered. He died next to her. “It’s just a heart breaking story,” says Zbur.

It’s a heartbreak President Obama has shared too many times. After visiting with the families of the murdered victims in Orlando on Thursday, he noted that there has been a stalemate in Congress that allowed the Orlando shooter to buy an assault weapon without undergoing a background check.

“Those who defend the easy accessibility of assault weapons should meet these families and explain why that makes sense,” Obama said.  “They should meet with the Newtown [Sandy Hook Elementary School] families — some of whom Joe [Biden] saw yesterday — whose children would now be finishing fifth grade — on why it is that we think our liberty requires these repeated tragedies.  That’s not the meaning of liberty.”

By not acting now, Obama said, “we’ll be choosing to allow them to happen.  We will have said, we don’t care enough to do something about it.”

In a separate email sent from the White House, Vice President Joe Biden referred to two amendments to the defense appropriation bill that Senate will bring up for a vote on Monday. The legislation, opposed by the powerful National Rifle Association, calls for universal background checks and a ban on suspected terrorists on the FBI’s no fly list from buying guns without restrictions.

Speaking directly to members of Congress “who, in the wake of this most recent, most horrific killing of our citizens, might be considering stepping up and getting this done once and for all,” Biden said, “I’d like to remind you that this will not stop on its own. It will not stop. In the three and a half years since Newtown, there have been at least 1,002 mass shootings in this country. At least 1,135 people killed, and 3,953 wounded. That includes 49 killed and 53 wounded in Orlando.”

That is a message heeded by EQCA in launching its #SafeAndEqual campaign to end gun violence by advocating for tougher common sense gun control laws at the federal and state levels, as well as making positions on gun control a major criterion when considering endorsing and supporting a candidate, as well as targeting a candidate for defeat.

“LGBT people and everyone else deserve to live free from fear, but the current patchwork of laws across the country is not keeping us safe,” said Zbur.  “Too many people, in communities from Newtown to San Bernardino to Orlando, have paid the price for the inadequacy of those protections and for the inaction of Congress.  It is time to enact tough federal gun control measures and strengthen state laws to assure that another Orlando cannot occur anywhere.”

“In light of the horrific attack in Orlando, our commitment to sensible gun reforms is strengthened,” said California Senate leader Kevin de Leon. “We are compelled to take action to safeguard our communities, and this week the legislature has demonstrated a real level of unity on the issue. Leadership in both houses is focused on passing a strong package of reforms by the end of this month. There is no need for an end-around on this issue. We have the will and the intent to get this done and get it done right.”

“None of us are immune from the tragedies that guns deliver every day in communities throughout our state and nation,” said California Assembly Speaker Anthony Rendon. “The Assembly passed a strong package of bills that cover several different aspects of gun violence. But we can’t do it alone. I believe having the strength and power and righteousness of Equality California behind this effort will absolutely help ensure the package’s success.”

“This is a national problem and California again needs to lead the way,” said LAPD Chief Charlie Beck.

Transgender activist Maria Roman also noted the overwhelming impact of gun violence toward the trans community, noting of the gun control legislation introduced in the California Legislature that “our lives depend on it.”

In response to the numerous graphic signs posted around West Hollywood encouraging LGBT people to “#shootback,” Roman said, “I do not think violence is the answer.”

At the state level, Equality California will aggressively lobby the legislature and Gov. Jerry Brown for a package of gun safety reform legislation deemed imperative by state leadership. Equality California is still evaluating Safety for All, a ballot initiative backed by Lt. Gov. Gavin Newsom.

Rep. Adam Schiff said he thinks EQCA’s new initiative “is great. I think it’s going to take the organizing power of the LGBT community, along with each and every other community, to win this fight against the NRA.”

More response is needed, as evidenced by the news that two Marines stationed at Camp Pendleton are under investigation for posting an apparent threat against gay bars on social media after the Orlando shootings.

“The photo initially surfaced on the Facebook page for “Camp MENdleton resale” and showed a Marine pointing a rifle at the camera with his finger on the trigger and a caption which read, ‘Coming to a gay bar near you!’ While the image has since been taken down, the image has been reposted across various social media platforms,” KCBS2 News reports.

Though “lone wolves” are still an issue, Schiff, a member of the House Intelligence Committee, says he thinks something has changed in the American psyche.

“I sincerely hope that this is a time now where we can actually get something done to curb this epidemic of gun violence,” says Schiff. “It does feel different this time. I have to say I didn’t think we’d need more that the tragedy in Sandy Hook to get Congress and the country motivated. But that was not enough, even with the death of all those beautiful children. But there really does seem to be just an enormous groundswell that we can feel reverberating through the Congress that the status quo is just not acceptable anymore. So we’ll see if we can translate that into action and we’re certainly going to do everything to try.”

Here is the packet of bills introduced in the California Legislature: