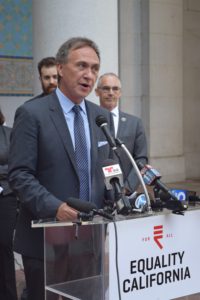 Equality California has filed a lawsuit challenging President Trump’s Aug. 25 directive prohibiting transgender people from joining the military and banning military healthcare plans from providing vital services to transgender servicemembers. Equality California is an organizational plaintiff in the lawsuit, together with seven transgender individuals impacted by the ban.

National Center for Lesbian Rights (NCLR), GLBTQ Legal Advocates & Defenders (GLAD) and the law firm of Latham & Watkins LLP represent Equality California and the individual plaintiffs in Stockman v. Trump. Equality California represents 500,000 members in California, including transgender people directly affected by the President’s directive, and seven individual plaintiffs across the country who are being harmed by the ban. The suit claims the ban unlawfully discriminates against transgender people on the basis of their gender identity; impinges upon transgender people’s fundamental rights by penalizing and stigmatizing them for expressing a fundamental aspect of their personal identity; and violates their right to openly express who they are.

California is home both to the nation’s largest population of LGBTQ people and to the largest number of service members. With his unnecessary and unjust ban, President Trump has attacked American heroes who simply want to serve their country. The ban would tear apart lives and livelihoods, cost tax payers hundreds of millions of dollars and deprive the military of loyal, talented service members – and it will not stand. 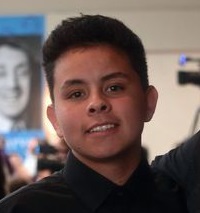 Aiden Stockman (lead plaintiff) is 20 years old and lives in Yucca Valley, California. He knew he was transgender from an early age and also knew he wanted to join the military and pursue a military career. Aiden researched and prepared to enlist in the Air Force, speaking to veteran friends and family about their experience, taking the Armed Services Vocational Aptitude Battery test and even undergoing chest surgery. His dream was shattered in August, 2017 when President Donald Trump reversed the Obama administration’s lift on transgender service members. The military service for which Aiden has long been preparing is no longer an option and he has few other career options. Aiden has experienced harassment and discrimination as a transgender man, and once has been made to feel like a second-class citizen. Aiden is suing the Trump administration for his right to serve his country and for a career he has sent his whole life preparing for. 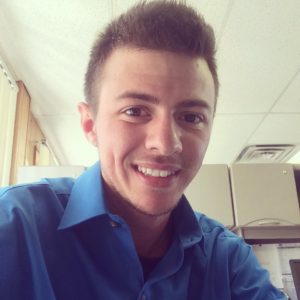 Nicolas Talbott is a transgender 23-year-old, living in Lisbon, Ohio where he cares for and financially supports his grandmother. While attending Kent State University, Nicolas decided on pursuing a career in global security and counterterrorism through military service. During college and following graduation, Nicolas took steps necessary to enlist in the Air Force National Guard, including looking into the Reserve Officers’ Training Corps (ROTC), preparing for the Armed Services Vocational Aptitude Battery test, getting in shape for the enlistment physical exam and working with recruiters. However, when President Donald Trump announced his ban on military service by transgender Americans, the door to the recruitment office was effectively slammed in his face. Nicolas has been forced to take on low-wage jobs, living pay check to paycheck, and still he is preparing for the day he can enlist. Nicolas is suing the Trump Administration so he can continue to live be his authentic self and pursue his dream of enlisting in the Air Force.

Also named in the lawsuit are Tamasyn Reeves and Jacquice Tate:

May 7, 2018 – U.S. Department of Justice replies to Plaintiffs in support of the motion to dissolve the injunction.

November 23, 2018 – U.S. Department of Justice files petition for a writ of certiorari before judgment, asking the U.S. Supreme Court to intervene before the U.S. Court of Appeals for the Ninth Circuit enters judgment.

December 13, 2018 – U.S. Department of Justice files application for a stay of the preliminary injunction, asking the U.S. Supreme Court to stay or “pause” the injunction and allow the ban to be implemented.

December 21, 2018 – State of California files letter in opposition to DOJ’s petition for a writ of certiorari.

December 24, 2018 – Equality California and Co-Plaintiffs file brief in opposition to DOJ’s petition for a writ of certiorari.

December 28, 2018 – Equality California and Co-Plaintiffs file response in opposition to DOJ’s application for a stay of the preliminary injunction.

January 4, 2018 – U.S. Department of Justice replies to Plaintiffs in support of the petition for a writ of certiorari in Stockman v. Trump and related cases Karnoski v. Trump and Doe v. Trump.

January 4, 2018 – U.S. Department of Justice replies to Plaintiffs in support of the application for a stay of the preliminary injunction.