Governor Newsom Celebrates LGBTQ Pride Month by Flying the Rainbow Flag Over the California State Capitol
Equality California Executive Director Rick Zbur calls flying the flag above the Capitol "a literal beacon of hope to LGBTQ people throughout the state and across the country."
June 17, 2019 at 11:17 am

Note: This press release has been updated to reflect the fact that a rainbow flag was first flown over the California State Capitol in October 1990, in celebration of National Coming Out Day, per the Bay Area Reporter. 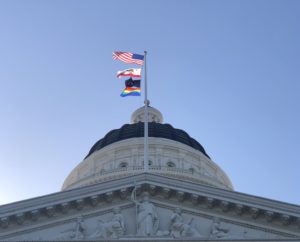 SACRAMENTO, Calif. — At the request of California Governor Gavin Newsom and in commemoration of June as LGBTQ Pride Month, the Pride flag will be flown on the main flagpole of the California State Capitol building​ today through July 1. The flag was raised this morning by staff from the California Department of General Services with oversight from an honor guard from the California National Guard.

“In California, we celebrate and support our lesbian, gay, bisexual, transgender and queer community’s right to live out loud – during Pride month and every month,” said Governor Newsom. “By flying the pride flag over the State Capitol, we send a clear message that California is welcoming and inclusive to all, regardless of how you identify or who you love.”

Today’s flag raising follows similar historical firsts in Colorado and Wisconsin and comes at a time when the federal government has told U.S. embassies they can’t fly pride flags.

“Seeing the Pride flag prominently flown at the Capitol reminds people everywhere that while some states and the federal government dehumanize LGBTQ people, California stands firmly for equality and inclusion,” said Senator Scott Wiener, Chair of the California Legislative LGBTQ Caucus. “It reminds LGBTQ Californians that our government is working to move our community forward.”

The pride flag was first flown on the flag pole above the State Capitol for a period of a few hours in October 1990, in celebration of National Coming Out Day. The flag has also previously been hung over balconies both inside and outside of the building and the Capitol dome was illuminated in rainbow colors in June 2015 when the U.S. Supreme Court decided that the Fourteenth Amendment requires all states to grant same-sex marriages and recognize same-sex marriages granted in other states. This June also marks the 50th anniversary of the Stonewall Riots in New York City, which is credited as one of the moments that launched the LGBTQ civil rights movement.

“Raising the Pride flag at the California State Capitol is symbolic of more than Pride Month. This is about respecting and honoring the humanity of all people,” said Assemblymember Todd Gloria, Vice Chair of the California Legislative LGBTQ Caucus. “At a time when the Trump Administration is forbidding U.S. embassies and consulates around the world from raising pride flags, we are sending the message that we acknowledge and respect LGBTQ people, and they have a home here in California. I am proud Governor Newsom is continuing to keep California as a rainbow beacon of hope for the rest of the nation.”

“Flying the Pride flag over the Capitol is a powerful symbol of California’s leadership on LGBTQ civil rights and social justice — a literal beacon of hope to LGBTQ people throughout the state and across the country,” said Equality California Executive Director Rick Zbur. “Once again, Governor Newsom is demonstrating his commitment to building a California for all. We’re deeply grateful to him and to the First Partner for being such dedicated allies to our LGBTQ community.”

Equality California is the nation’s largest statewide LGBTQ civil rights organization. We bring the voices of LGBTQ people and allies to institutions of power in California and across the United States, striving to create a world that is healthy, just, and fully equal for all LGBTQ people. We advance civil rights and social justice by inspiring, advocating and mobilizing through an inclusive movement that works tirelessly on behalf of those we serve. www.eqca.org