Imagine walking into a doctor’s office, or being wheeled into a hospital, just to be denied basic medical care because of your sexual orientation or gender identity. For too many LGBTQ folks, this isn’t something to imagine — it’s reality. And while the vast majority of medical providers treat their patients with dignity and care, no one should have a “license to discriminate.”

Instead of working to combat bias and discrimination among medical providers against LGBTQ patients, however, President Trump’s Department of Health and Human Services (HHS) created a new so-called “Office of Conscience and Religious Freedom,” which could empower doctors, health care professionals and even insurance companies to refuse treatment to LGBTQ patients — simply because of their sexual orientation or gender identity. It wouldn’t just impact our community, either; a broad group of patients seeking care could be impacted:

When HHS sought public comments on its proposed rule — which basically invites medical institutions, insurance companies and individuals engaged in patient care to discriminate against certain patients — Equality California had a lot to say. 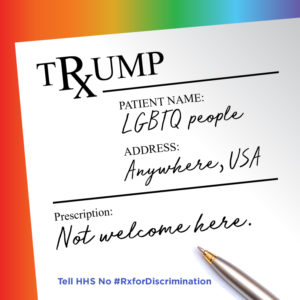 Simply put, the proposed rule has nothing to do with protecting religious freedom and everything to do with allowing a fringe group of medical institutions, insurance companies and individuals engaged in patient care to discriminate against patients because they disapprove of who they love or how they identify.

Equality California’s public comments urged HHS to reject the proposed rule on the grounds that it encourages discrimination and would seriously harm the most vulnerable members of our LGBTQ community: seniors, transgender and gender nonconforming people, foster youth and their guardians, low-income people, those living with HIV and AIDS and residents in rural or remote areas. When these people are turned away from a doctor or medical professional, they’re far less likely to have access to viable alternatives for seeking life-saving care.

We also opposed the rule because its vague and overly broad wording would make it far too easy for anyone — not just doctors and nurses, but schedulers, lab technicians and even bus drivers — to refuse medical treatment to certain people because of their sexual orientation or gender identity

Equality California believes that healthcare should be based on medical best practices and the needs of the patient — and that while religious freedom is a fundamental principle of American Democracy, it doesn’t provide anyone with a “license to discriminate” against others.